Turquoise water, beaches for miles, gorgeous bays, and breath-taking national parks – it’s no wonder that Croatia’s popularity as a travel destination has been growing in recent years. Whether you are a water sports enthusiast, a history buff or a nature lover, you’ll get your money's worth in the land of one thousand islands.

The culinary richness of the country in particular is attracting more and more gourmet-lovers to the Adriatic Sea. Food tourism is booming in Croatia, because hardly any other country can offer such a wide variety of national cuisines. From hearty meat dishes to freshly caught fish and savoury stews – Croatia has something on offer for all tastes!

Learn more about the history of Croatian cuisine, discover regional and seasonal highlights, and try them out yourself! We’ll bring a piece of Croatia into your kitchen with our ultimate food guide. Dobar tek!

The versatility of the regional cuisines

Croatia's culinary landscape is shaped by the country's geographical location and rich history with its neighbours. It’s not unusual to find a Hungarian goulash or an Austrian apple pie on the menu. Croatian cuisine varies greatly from region to region, so it’s no wonder that it’s affectionately called the "cuisine of the regions".

While the cuisine in the inland and in the east is still strongly characterised by the former Ottoman occupiers, in the north of the country from the food has been influenced by Hungarian and Austrian cuisines. Meanwhile, those who like Italian or Greek dishes should travel to the coastal areas and to the south of Croatia – the home of modern, Mediterranean cuisine.

Dig into our culinary food guide and discover the vivid cuisines of the different regions for yourself! Our food map will give you a detailed overview of the most popular and well-known dishes and drinks that you shouldn't miss when vacationing in the designated area. Let's go! 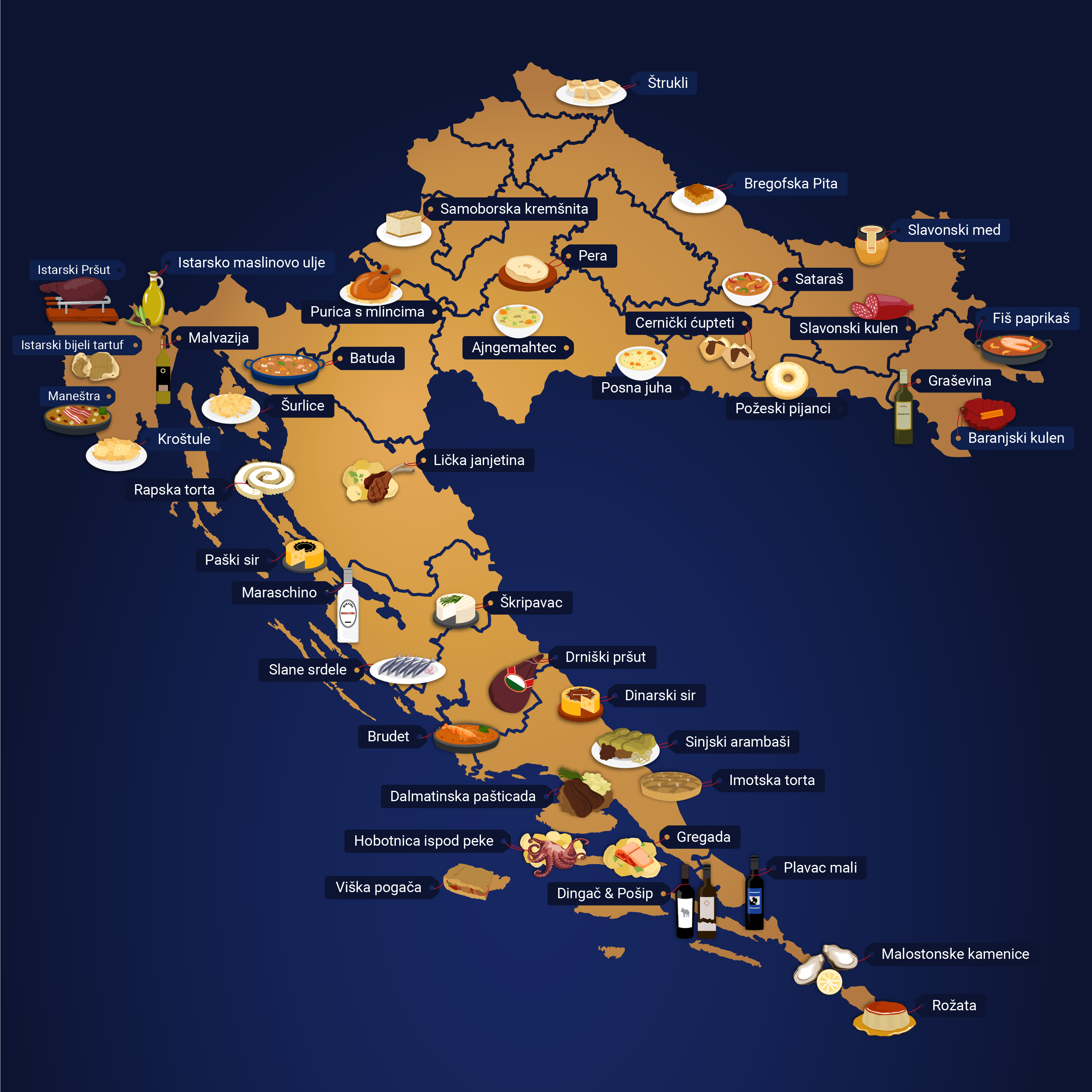 A culinary trip through Croatia

The diversity of the Croatian cuisine is especially prominent in the regions of Istria, Dalmatia, and Slavonia.

The largest peninsula on the northern Adriatic is known above all for its Italian-influenced cuisine. With offers from wine to ham, and all the way to pasta, no holidaymaker should miss out on these dishes:

A visit to the historic region of Dalmatia is an absolute must, especially for gourmets! Dishes like black risotto and pickled oysters will make the heart of every foodie beat faster. Make sure to try at least these local culinary highlights:

Specialities of the inland: Slavonia

Slavonia captivates with its very strongly spiced and Hungarian occupancy-influenced cuisine, numerous meat and game dishes, stews and goulash specialities – a clear contrast to the Istrian and Dalmatian cuisine. If you are vacationing in Slavonia, you’ll certainly encounter these local specialities:

Croatian cuisine is anything but one-dimensional. But is anything "typically” Croatian? Although each region offers its own culinary highlights, there are two main ingredients that unite them: fish and meat – a fact on which all holidaymakers can all agree. One dish without which a holiday in Croatia is not complete is the well-loved cevapcici. These grilled tubes of minced meat are considered the national dish par excellence in Croatia.

Vegetarians and vegans won’t be left with empty stomachs either. From savoury vegetable stews to spinach or potato-stuffed dumplings, Croatian cuisine is a real treat for everyone, and very healthy, too. Steamed vegetables, seafood and lots of olive oil not only help you keep a slim figure but also sooth your mind and soul. There’s no need to feel guilty. In Croatia, most restaurants also get their ingredients from the numerous weekly markets in the area –100% organic!

Seasonal vegetables and fruits from nearby farmers play a central role in Croatian cuisine – freshly harvested just tastes the best!

In spring and especially during Easter, pinca will be found at every single table. The sweet pastry is a traditional, Croatian Easter bread, consisting of a yeast dough made of flour, eggs and butter. The coarse-sugar-coating makes the pinca especially popular with the little ones.

The summers in Croatia are hot. Thus, when the temperature reaches +30 degrees Celcius, the Croatians will turn to light dishes. During the high season, such typical lighter foods include salads and fish dishes. Salata od hobotnice is a traditional octopus salad that has its origins in Dalmatia. Although there are many variations of this dish, it’s most often a combination of chopped octopus, onions, garlic, bay leaves, olive oil, parsley, potatoes, salt, vinegar and tomatoes.

Autumns in Croatia are wonderful, thanks to the mild temperatures and the lack of large tourist groups. Popular dishes among Croatians during this time of year are soups and stews, such as the Istrian Maneštra. Another must-try dish is Grah. This traditional bean stew used to be a common meal for the Croatian army as well as for poorer people. Today it’s a real classic dish, and with its accompanying sausages, it’s impossible to imagine Croatian cuisine without it!

Christmas time turns Croatia to a real winter wonderland. The frozen waterfalls, snow-covered forests, and festively decorated towns make you feel like you’ve just entered a children’s fairy tale. There’s no better way to keep warm during the cold Christmas season than by enjoying hearty dishes such as Sarma or Purica s mlincma. Sarma is in essence a cabbage roll, although it can also be made with vine leaves. The filling consists of minced meat, rice or bulgur, herbs, spices, red pepper, paprika, ground sumac and tomato sauce. Similarly, Purica s mlincma is also a very popular winter dish. It’s roasted turkey served with Mlinci, a traditional thin flat brad.

Culinary highlights to cook at home

As the saying goes, the way to someone’s heart is through their stomach. The same can be said of the love for other cultures and countries. Dreaming about holidays helps us to make it through the darker winter months. And that’s exactly what we need now, right?

With these four recipes, we want to bring back the holiday memories and bid wanderlust farewell. Add some appropriate background music, wine and great company, and it’ll feel just like being on a vacation. 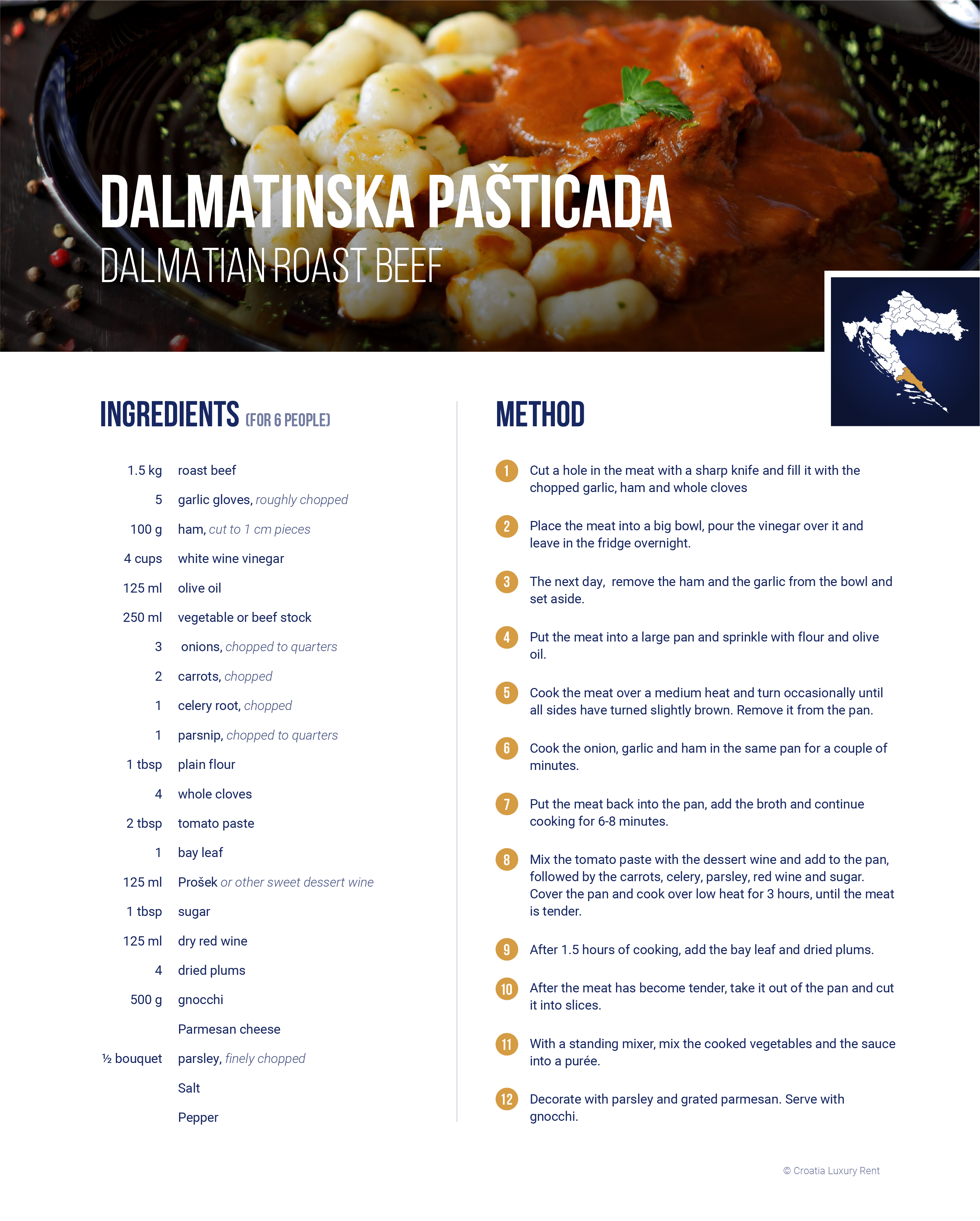 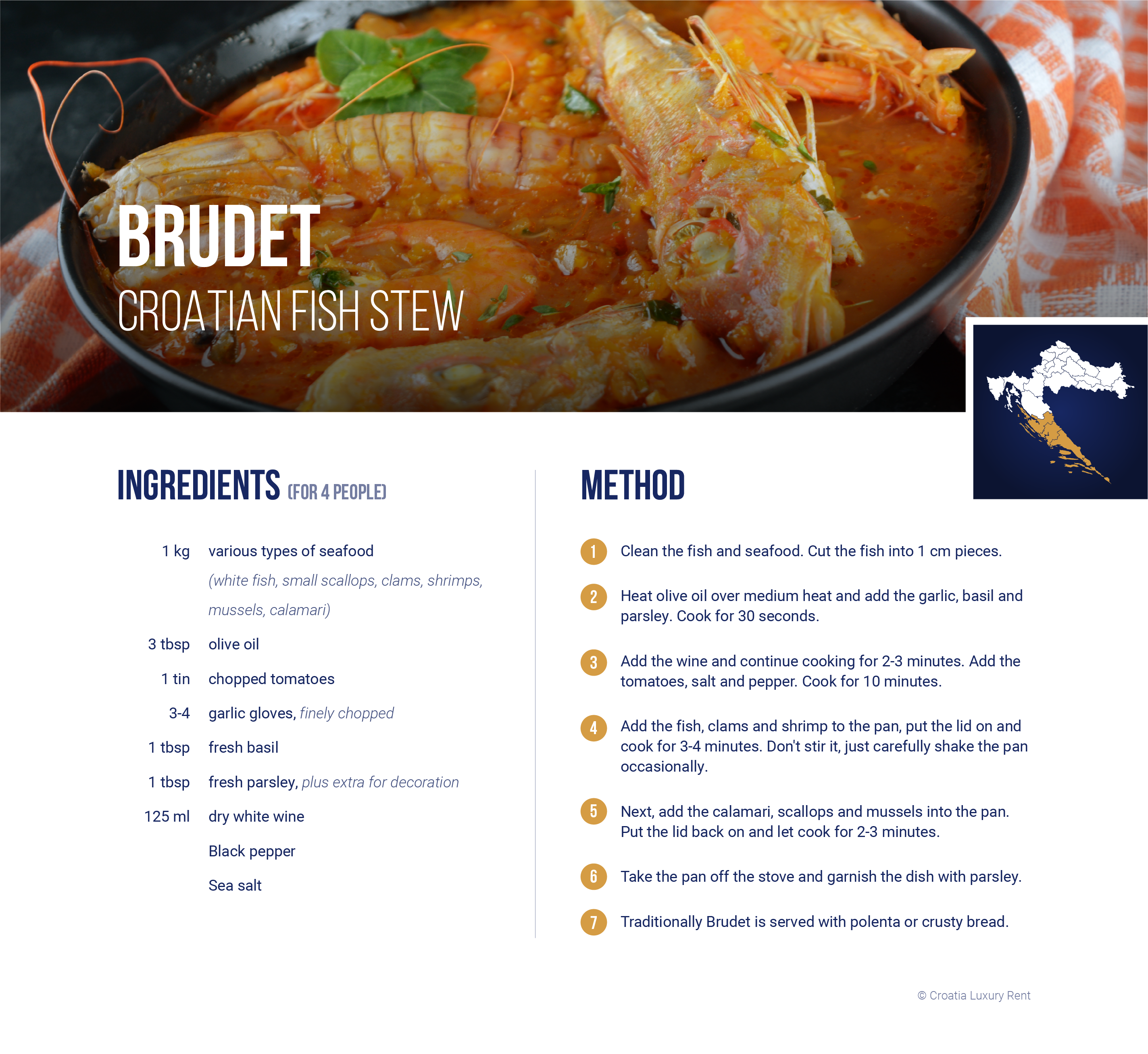 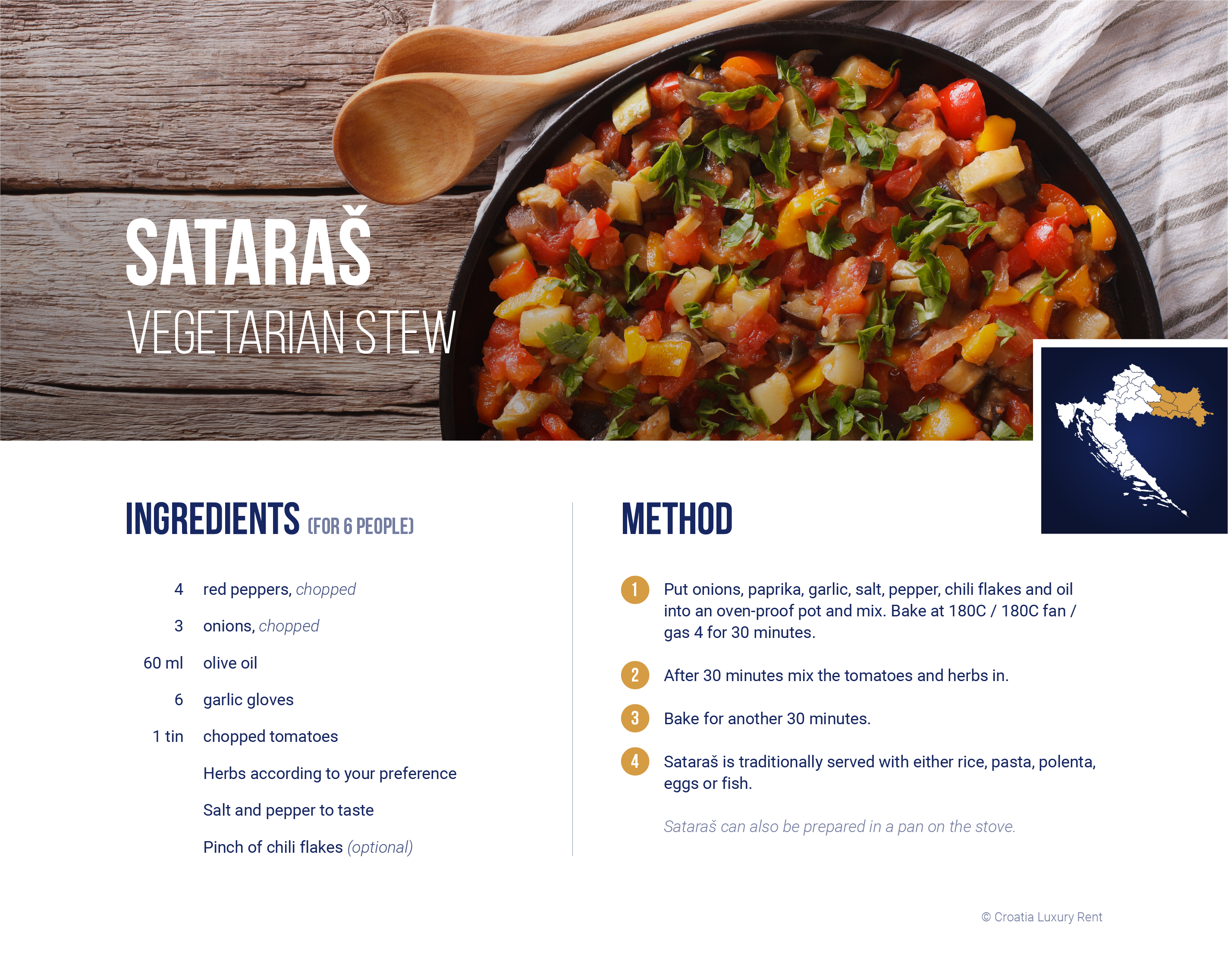 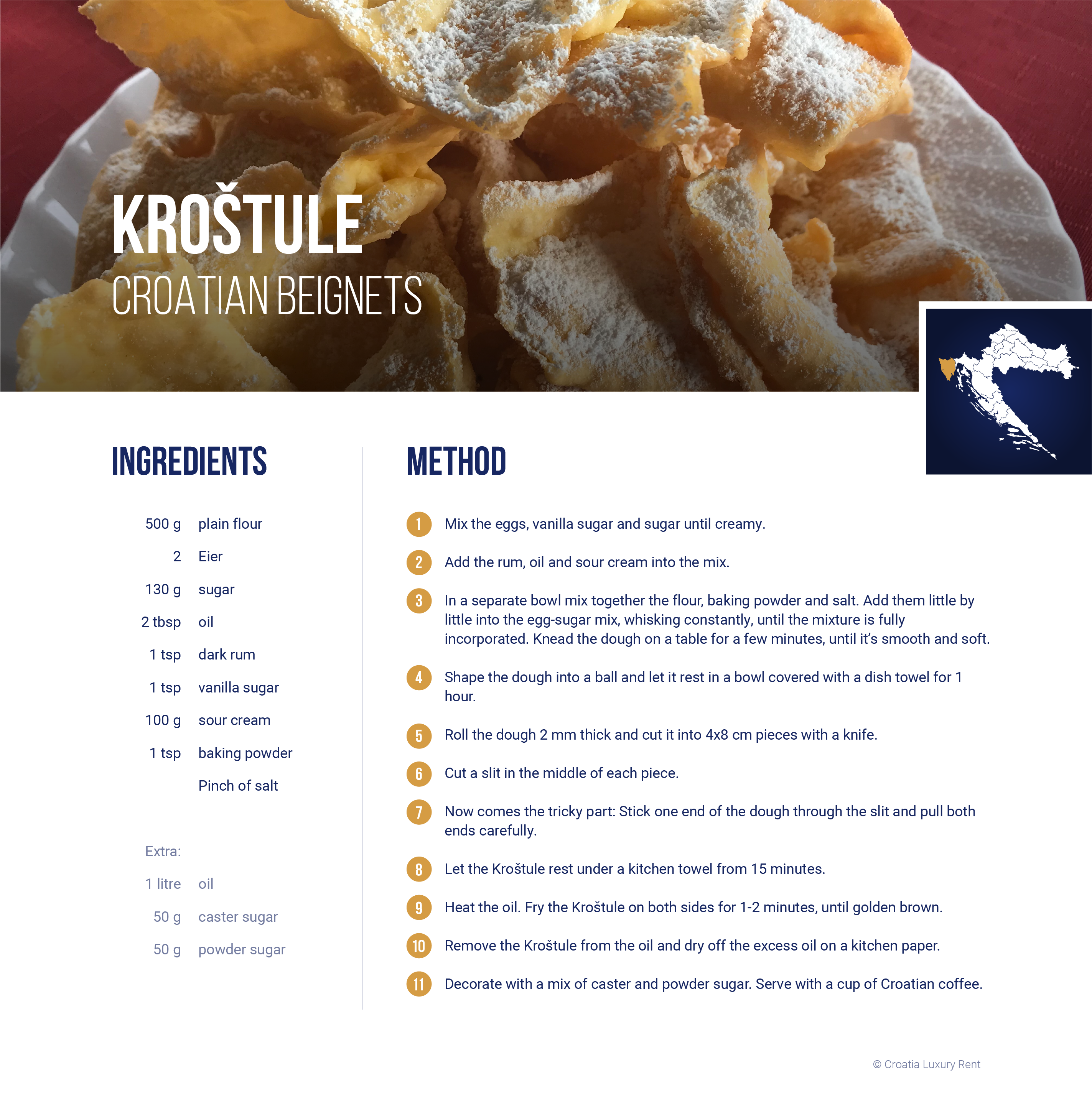 Would you rather savour these delicacies in Croatia? Then book one of our luxurious villas in the most popular regions in Croatia and experience the country’s culinary delights yourself!